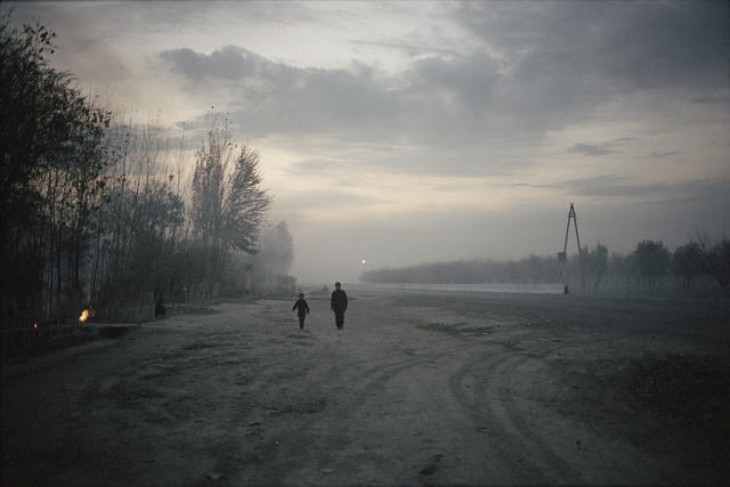 This exhibition gathers several series from the photographer: the most recent ones, Sacha (2007-2010) and Les Princes Charmants, but also Artek, un été en Crimée (1999-2003) a series that takes its name from an old camp for young soviet pioneers, and finally Loulan Beauty (2002-2005), a journey through central Asia. Are also planned within the exhibition a film projection around Claudine Doury’s work, signings and a guided visit by the photographer.

“Time is and will always be the primary material of photography. This statement is, in Claudine Doury’s work, amplified by her taste for transitions and changeovers into unknown periods. From her first travels to her close family, she reiterates the narrative of an harmonious world, spontaneous and civilized. An Eden that would be nothing less than an extinct museum if it wasn’t travelled by a subtle feeling of fear: how much longer will it last? Like an adolescence endlessly reenacted.

Reenacted with Artek, that takes its name from the last summer camp for the children of the Russian Nomenklatura. No nostalgia of the soviet pump in this long-term work. Instead, the amazing vitality of those summers in Crimea, on the coasts of the Black Sea, where young people are at the leading edge of life. Decors and uniforms don’t even highlight the anachronism of a disappearing world anymore. They are the perfect framework of this theatre, a general rehearsal that only adolescence will be able to interpret.

In her next work, Loulan Beauty, Claudine Doury invokes an ancient kingdom located on the Silk Road, on the borders of Central Asia and China. Here, the allusion to time and history is so strong and permanent that it becomes almost invisible. Each photograph is loaded with the past and foresees a future made of exile. A strange absence of present time.

Finally, Sasha and Les princes charmants (the princes charming), her newest series, don’t reenact life anymore. They dwell upon the tools that build identity and emphasize the gender. With, this time, the certainty that the teenage girl depicted will end up getting away.”